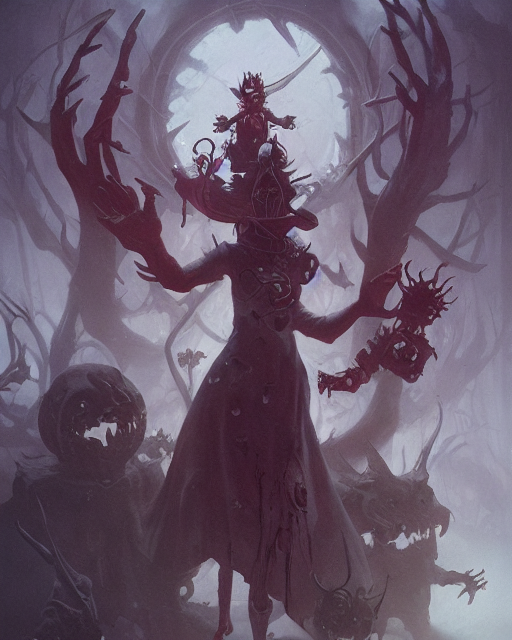 A Writer's Diary - Part 6: The Text About Getting Stuck

mars 21, 2022
A fine day, but her mind had gone a little foul. She mumbled in her thoughts. Mumblegrumble. Come to me, oh Inspiration. Foul and foul alike. Another thought went past, but she couldn’t get a hold of it. Anger rose in her; black-and-red clouds of pyroclast, reeking of sulfur and death. Yet again, she banged her head on the desk. Little drops of lukewarm coffee speckled debris papers, and she roared. Banged her head. Banged her fist. Banged both fists. Her skin ruptured and now she bled. Maybe it was all too much. Maybe she was in over her head. Nope! She refused to let it go. Yes , her day had gone wrong since yesterday. And yes ,   her body was totally against her; but how in the three deep hells would she ever get anything done in this life if she were to wait for the good days. Good days were a precious few; an exotic currency in which nothing could be traded. And if she had five in a year, that was a lot. Suck it up, princess. Her brain groaned with sleep deprivation. Her sto
Legg inn en kommentar
Les mer

A Writer's Diary - Part 5: The Text About Feelings

mars 12, 2022
So many things wanting out. All at the same time. It was a long time since the time when she felt time slow and become endless time. It was a long time, since so many things had wanted out at once - and found a way. She tried not to stop. Her mind was a vortex and her fingers a blur; she was a willow and a fire and a gale and a monster. She was a girl. She was a woman. She was a girl again, and her fingers hesitated; then, she was a woman again; a wild, feral, raging, all-consuming goddess, out to destroy the world, or heal it. It all depended. Now, she was a sea; still, deep and blue; fathomless blue, and fathomless deep; then a wind broke, and she was a crashing tide; then a gale broke, and she was a maelstrom; then an itty bitty shell floated down her middle, and she was a girl again; eyes saucer-wide with wonder and curiosity, and the tide stilled once more. She picked up the shell and studied it. Tilted it sideways and edgeways, feeling the pearly smooth white with her eyes; tast
2 kommentarer
Les mer

a Writer's Diary - Part 4: The Text About Text

mars 05, 2022
Another day altogether. The lawn had gone a fresh, newly-sprung green in the last two weeks. It was an odd kind of day. A hurtling-forwards-while-standing-still kind of day. A day of kind of belonging, but belonging a little on the side. She sighed as her fingers poured over the keyboard at a quiet pace. There were words today. Not plenty of words, but just enough, and just easily enough placed at the almost-front of her mind, so she didn’t have to reach too far, or pull too hard to grab them. But she was in an odd kind of mood, and it put her concentration at a slant, just a little. In her minds eye, mountains rose in purple-blue fog and called for weather dragons, who circled the mountains lazily, partly sheltered by the fog. Fire spirits and water nymphs darted on the hurtling updrafts. But behind her inner vision, a little behind her eyes, towards the back of her head, doubts and fears swirled in a lazy, leering circle. And an insistent throbbing on her left side temple kept knoc
Legg inn en kommentar
Les mer

A Writer's Diary - Part 3: The Next Text

februar 26, 2022
It was a different kind of day. This day, her eyes almost swiveled around in her skull, just dying to be done with the world. Her mind was aiming for mindful, but frankly it was very little mindful , and a lot just full . Those who’d never felt streaks of white fire shooting in web-shaped patterns through their head hadn’t yet lived. It was an out-of-touch kind of day. Waking up, she’d felt more than ready to face it, but as it progressed, her mind tilted more and more sideways. Finally, it slid into a gooey-grey gulf garnished with slate gravel, and she watched in fascinated horror as her mind chewed itself to rags.
Legg inn en kommentar
Les mer

februar 19, 2022
The fact is, I don’t know where my ideas come from. Nor does any writer. The only real answer is to drink way too much coffee and buy yourself a desk that doesn’t collapse when you beat your head against it. - Douglas Adams Her gaze dragged past the reflections in the window pane, and sloped in a zigzag across the greening lawn outside. It wasn’t an exploring kind of gaze; it was a reluctant but helpless kind of gaze, fighting not to be drawn towards whatever it was that it was drawn towards. Because let´s face it: It wasn’t drawn towards anything in particular. No; her gaze was always drawn towards something ; a lot of the time that something was just a great big pile of nothing . Nonetheless, it was always drawn . And it was odd, really, for her eyes were so tired. She wanted nothing to do with her eyes being drawn, not at all , yet still - here she was. It was greening outside. The trees had sprouted a little more vigor only since this morning, and the lawn was now less wither-y y
2 kommentarer
Plassering: Norge
Les mer
Flere innlegg